Neymar shows his support for Rafinha after goal against Levante

Barcelona strolled to a 4-1 victory over Levante yesterday and in the midst of their celebrations Marc Bartra and Neymar paid tribute to their injured team mate Rafinha.

Rafinha was injured last week during Barcelona's 1-1 draw away at Roma and is suspected to have cruciate ligament damage. If this is the case he is set to be spending a long amount of time on the sidelines.

But Rafinha will have smiled last night when unlikely first scorer Bartra held up his shirt in support and then Brazil captain Neymar repeated the trick when he doubled the lead six minutes later.

Neymar later also posted a message of support on his Instagram page.

"It is difficult to understand some things, we look for causes, we want to know why now? .. But only God knows," wrote Neymar. "I know how you feel, I was there a year ago. But I'm sure that this experience will make you stronger. At the moment, you are with people you love, and these people will help you recover faster. I am with you my brother, I pray for you and I wish you a speedy recovery "wrote Neymar.

Rafinha had just begun to break into the starting eleven at Barcelona and had also won his first cap for Brazil earlier this month. His injury has added to the worry that Barcelona do not have enough strength in depth.

Luis Enrique appealed to the Spanish FA to be allowed to register new signing Arda Turan in the wake of the injury. This appeal was blocked by FIFA who have imposed a transfer ban on the Catalan giants throughout 2015. This means new signings like Turan cannot be registed until January. 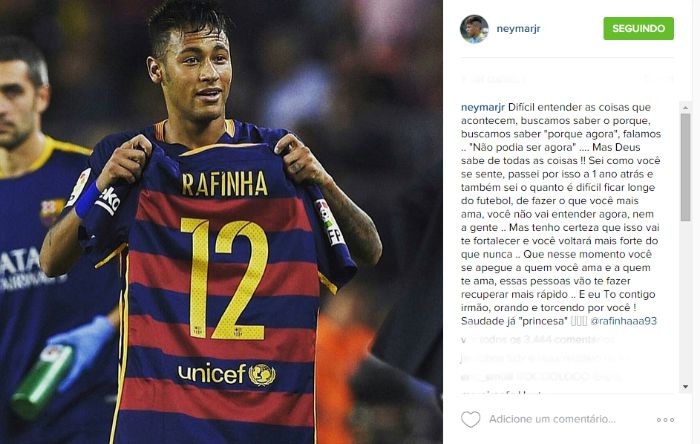