Sporting Lisbon have had a difficult season in Portugal and now it seems they will step up their search for new players this summer.

According to Portuguese newspaper A Bola, Sporting have been keeping track of Giovanni Augusto for some time. The 25 year can play either as an attacking midfielder or a striker and has started the season in good form for Atlético Mineiro.

Last year Augusto was on loan at Figueirense where it seems he first came to Sporting's attention. According to A Bola the player has all the attributes to be successful at Sporting with great balance and technical ability. 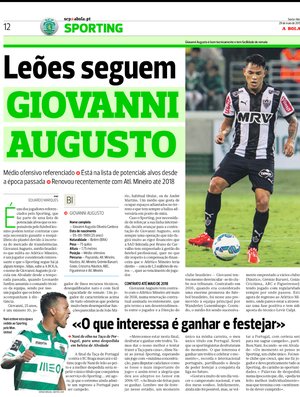